Phase 1 of the Clintonville Neighborhood Greenways has been funded! We are in the process of working on a detailed route and design with the City of Columbus.

This is a working document outlining our recommendations for Phase 1 of the Clintonville Neighborhood Greenways. It’s intended to be a starting point for the detailed designs that will be developed by the City of Columbus.

In our case, the minimal viable product is a network of neighborhood roads that feel safe for all ages and abilities. This boils down to the following:

The Phase 1 route was chosen to connect to all parts of Clintonville while remaining easy to implement. Wherever possible, we chose streets that already met our goals for Neighborhood Greenways so that minimal changes will be required.

Calumet Street (‘A’ on map) is the biggest challenge on the Neighborhood Greenways route. Traffic volume is 2200 cars/day - twice what we would like. 85th percentile speed is 33mph in some places - well above our goal of 25mph. Because of the windy nature of the road and higher traffic volumes, unsafe passes are common, making this road unsuitable in it’s current condition for families and other risk-averse people.

Calumet is a neighborhood collector, which means traffic restrictions will be difficult. Because on-street parking is widely used, especially south of Weber, we cannot make room for bike lanes.

Visually narrow road. The wider sections of Calumet lead to faster speeds. One option is to stripe out an 8’ parking lane. Also evaluate for green infrastructure such as curb bump outs in coordination with Columbus Blueprint.

Add “Bikes may use full lane” signs. These signs are the recommended standard for clarifying that bikes are allowed full use of the road. “Share the road” signs should not be used. 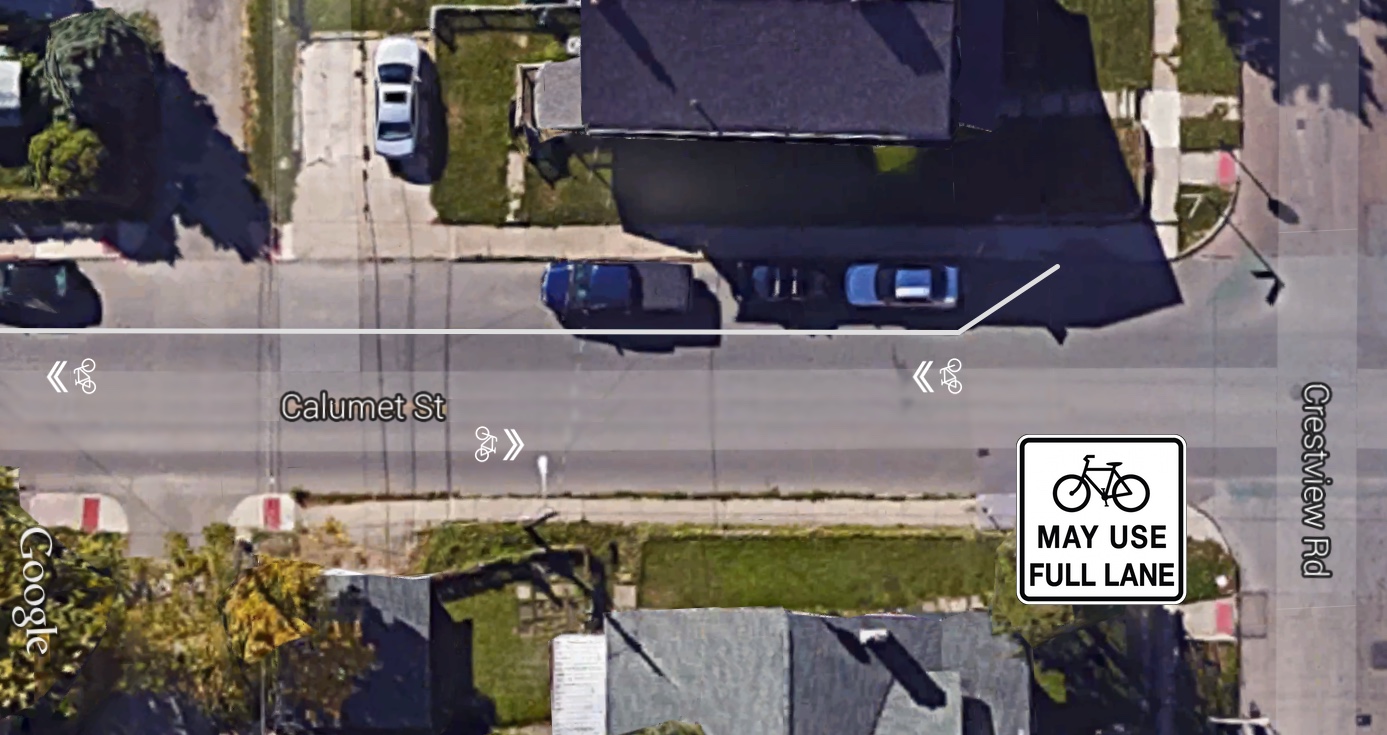 Traffic at this intersection (‘B’ on map) increased significantly after the new Starbucks opened. Although drivers are fairly cautious and aware of people biking and walking, the large volume of cars can make navigating this intersection tricky.

This 6-way intersection (‘C’ on map) is large and has numerous conflict points. While traffic volume is generally low, it can still be tricky to navigate with bikes, cars and pedestrians all using the same space. 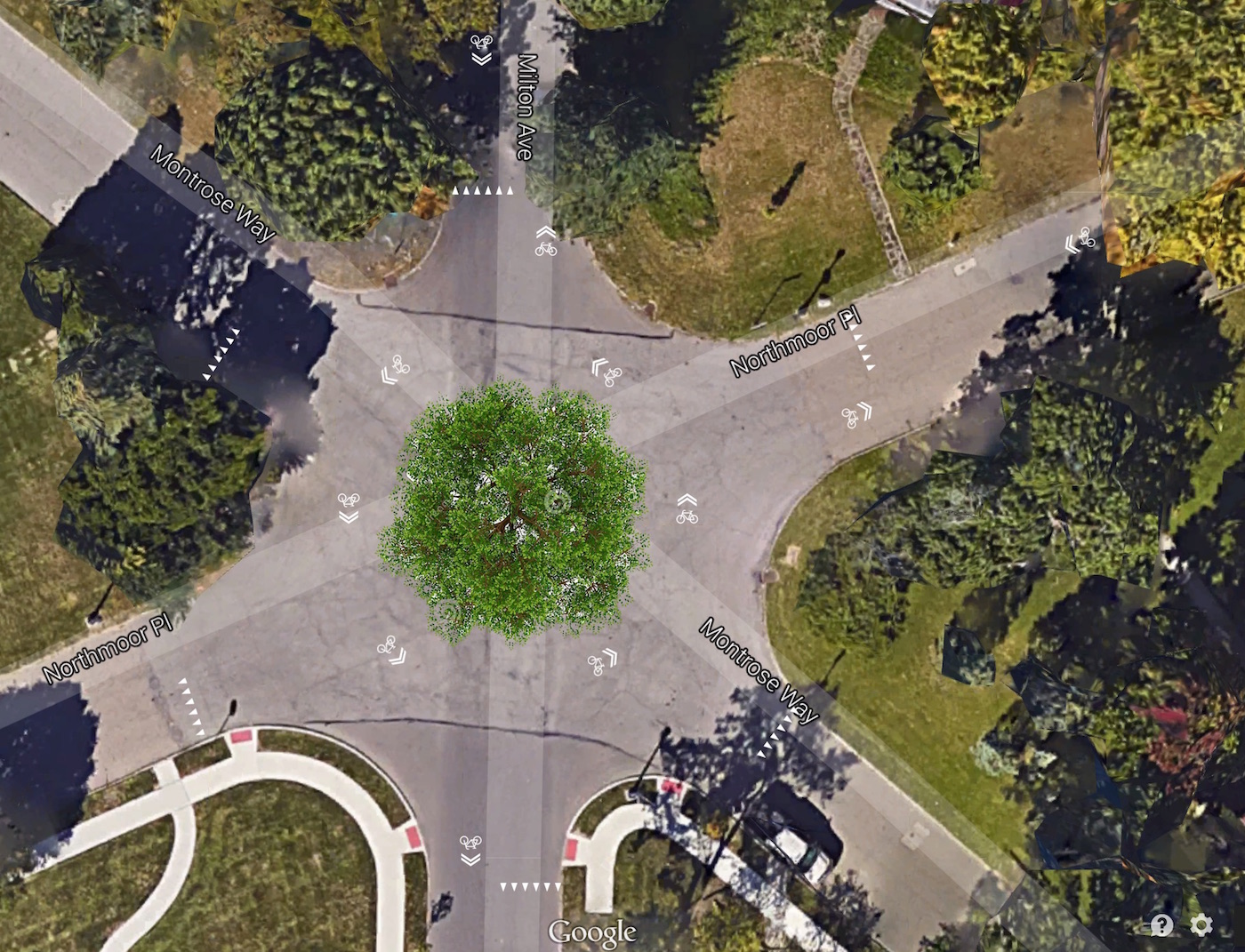 Intersection of Milton and Hollenback

This intersection (‘D’ on map) is difficult to navigate because it’s offset with the exit from the library. Traffic is generally slow and people navigate cautiously. The most common conflict is between people turning left from Milton onto Hollenback and people exiting the library.

Long-term this intersection should be re-aligned with the library exit and converted to a 4-way stop. For Phase 1 consider adding additional sharrows through the turn to highlight the presence of bikes. 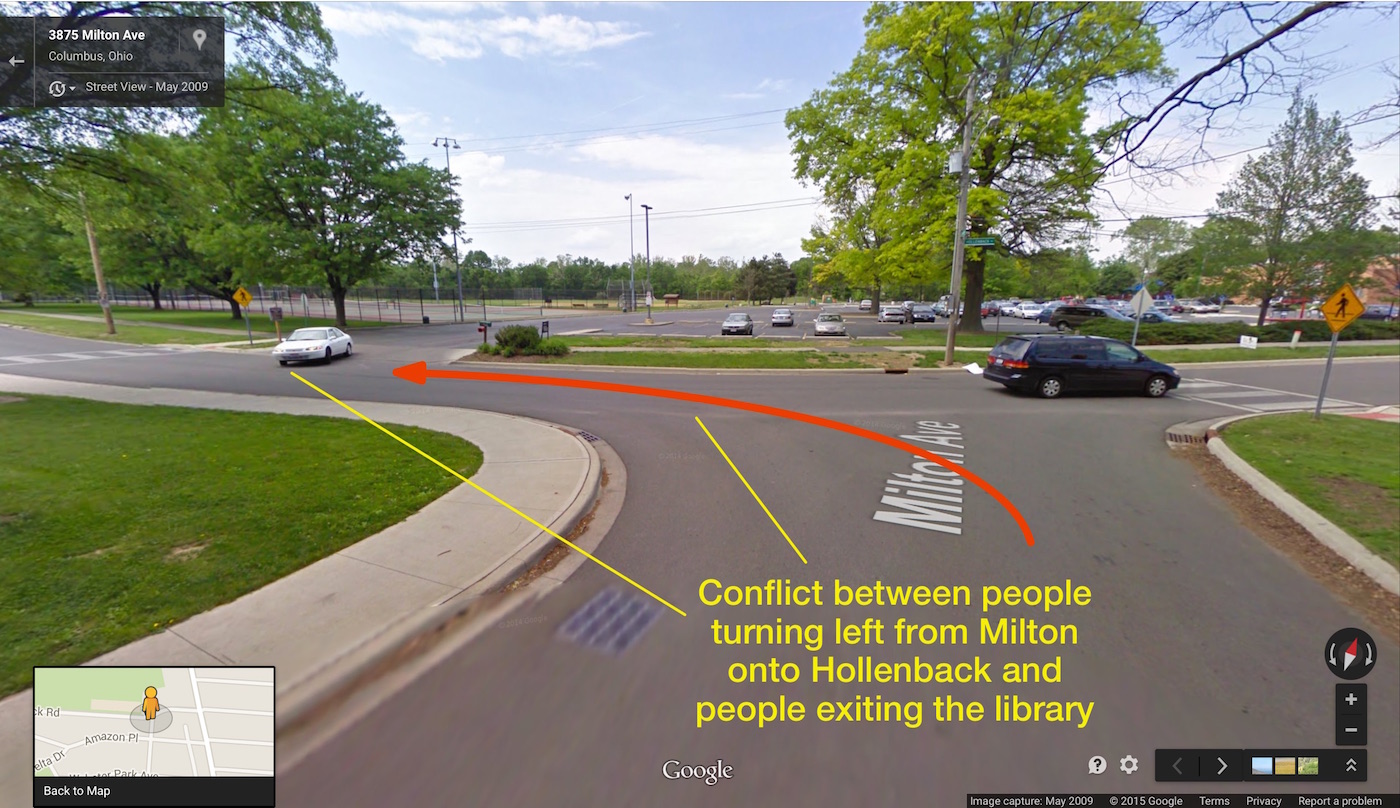 Hollenback (‘E’ on map) is a park road. Traffic volume is sometimes high, especially on evenings with children’s soccer. However speeds are low and people are alert.

There is a side path that parallels Hollenback. This path is narrow and the surface is uneven. There are several conflict points where the path crosses driveways. Getting on and off the path also requires crossing traffic.

While some people may choose to use the side path, the Neighborhood Greenways route should use Hollenback and should be marked with sharrows. 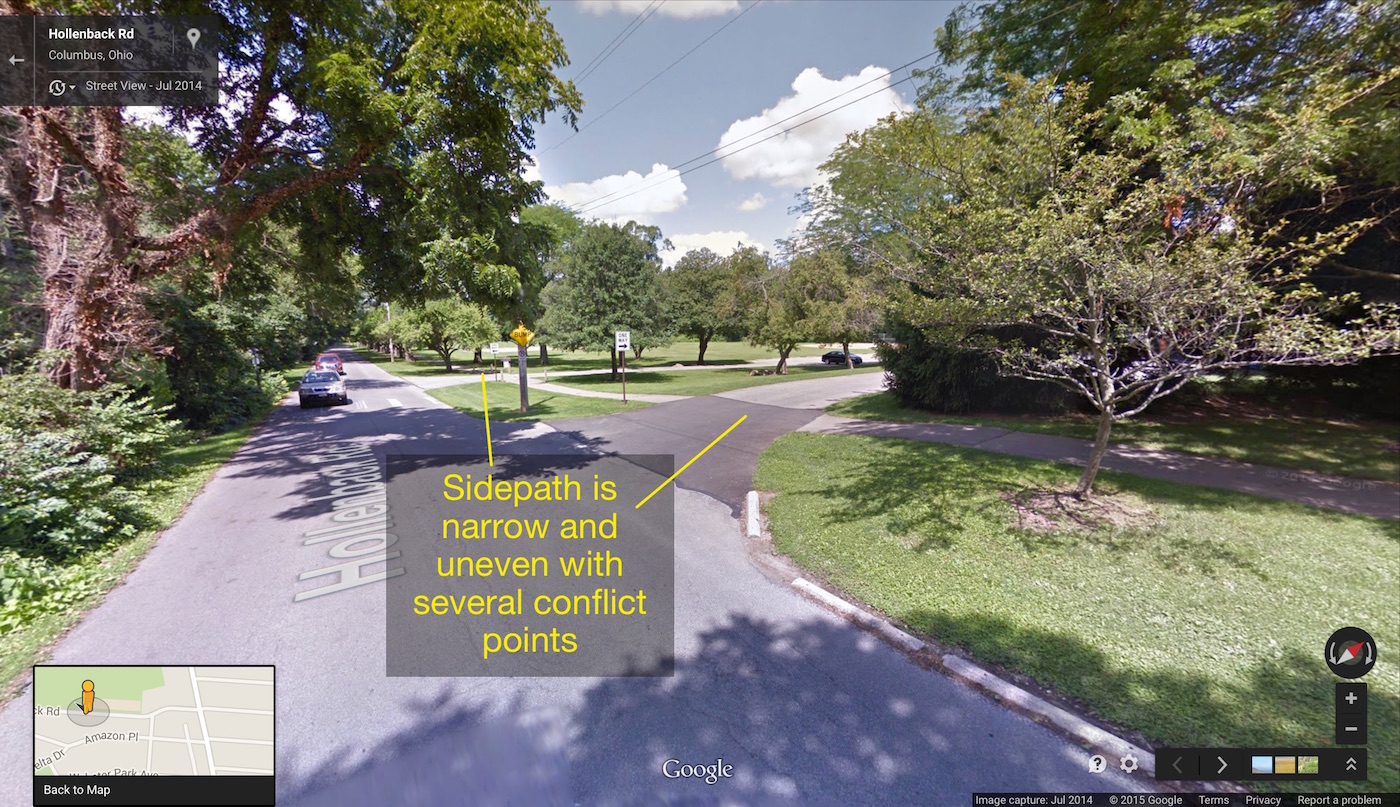 The route past the shelter house parking lot (‘F’ on map) is confusing. It appears the road goes straight into the parking lot. There are two parking lot exits with stop signs, but because of the curvy nature of the road, it’s not clear who has the right of way.

Use sharrows and a white edge line to define the travel lane. Add stop bars at parking lot exits to clarify right of way. 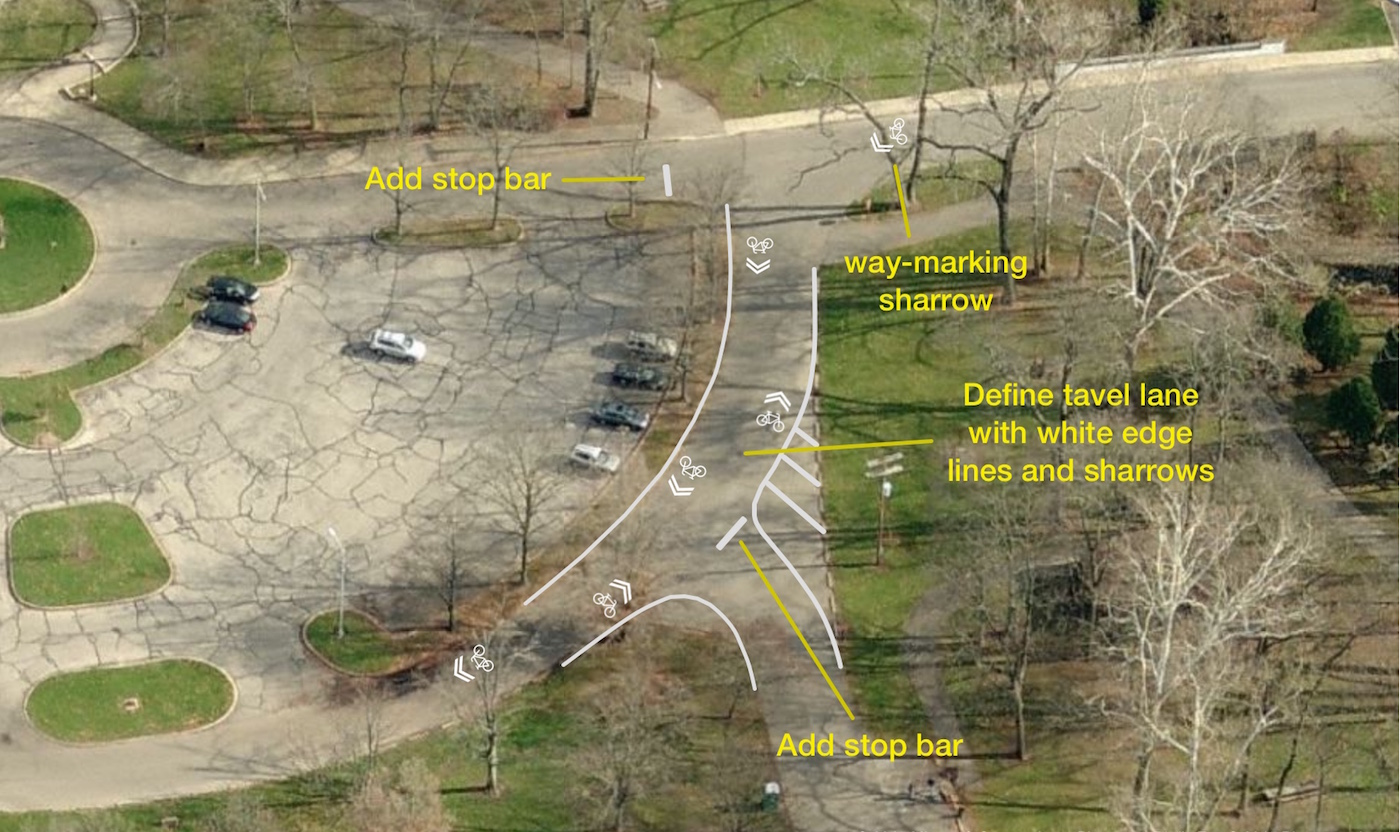 Replace gate with bollards, allowing people biking to pass through, or add a new bike exit following the desired direction of travel (‘G’ on map) 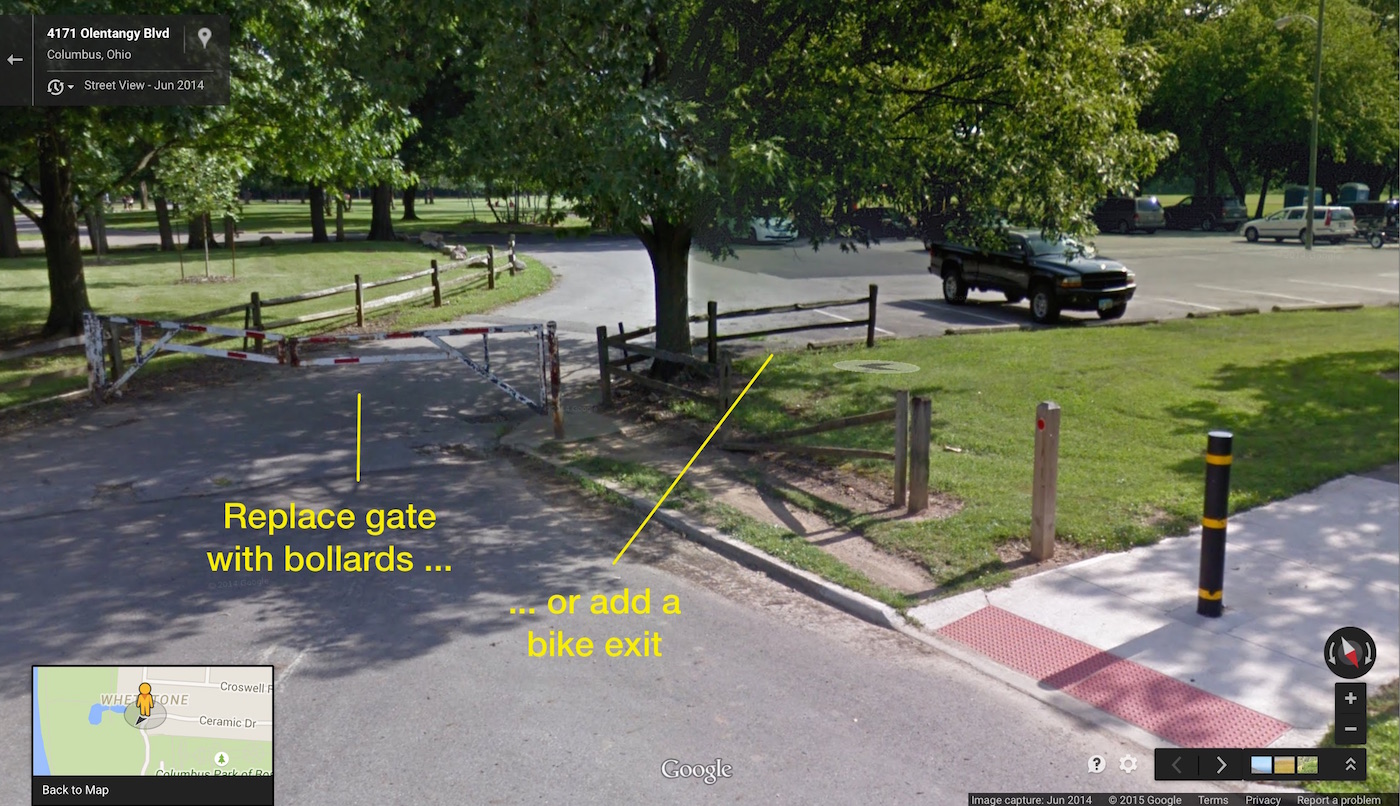 There is a problem with drivers bullying people on bikes at this intersection. Drivers that want to turn right don’t like waiting behind bikes that are going straight and sometimes honk and yell at them to “get out of the road”. Bikes often go up on the sidewalk ramps to wait which causes problems at they re-integrate into the traffic flow when the light changes.

Evaluate the intersection for bike boxes. Bike boxes would create space for bikes and would clearly communicate that people on bikes should wait in the road and not on the sidewalk ramps.

This intersection is offset (‘I’ on map). However, since there is a 4-way traffic signal, it would be possible to re-align the intersection for bikes. This could be done by converting one of the bank exit lanes to a two-way bike lane, or by adding a two-way bike lane to the north of the bank exit. The north-east corner of Weisheimer and High is being redeveloped, so this is a perfect opportunity to start the discussion. 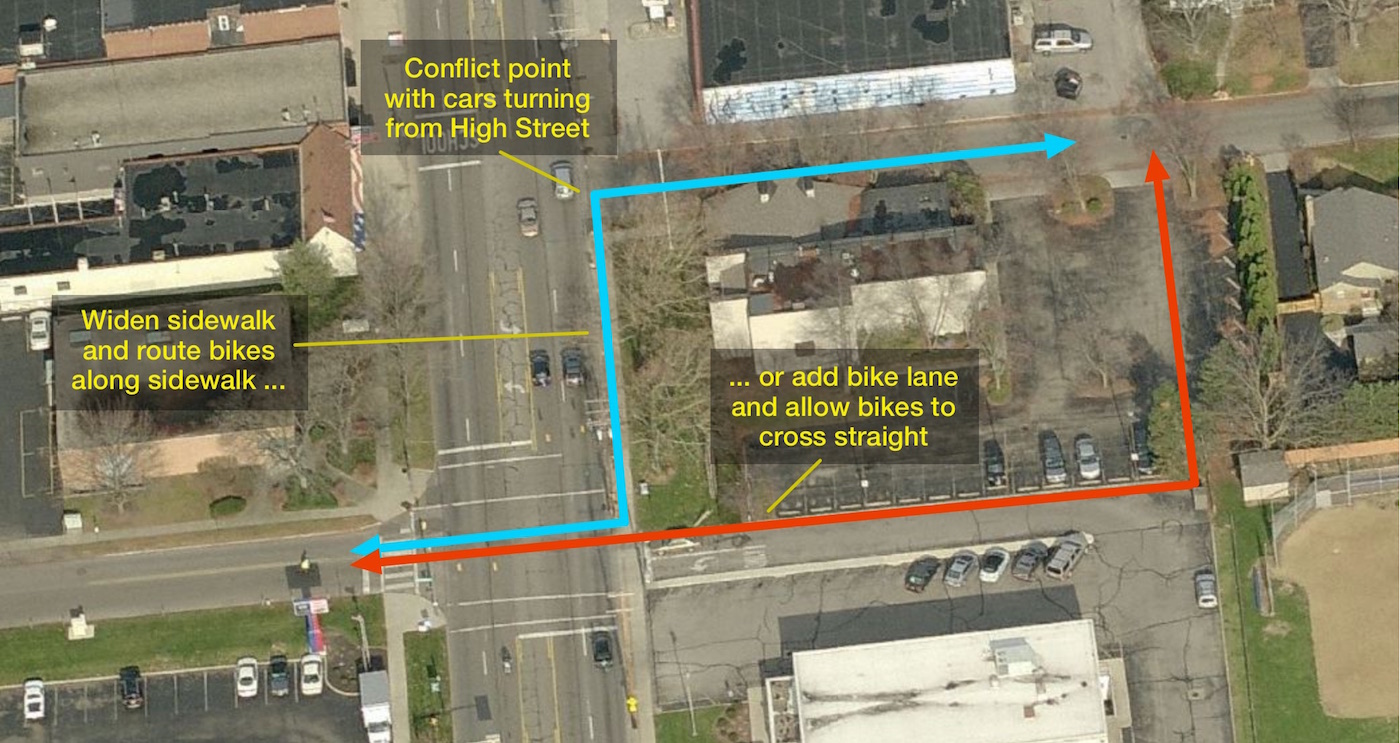 Based on guidance from engineers in Portland, we feel that targeting traffic volumes of under 1000 cars/day is essential to making a neighborhood greenway safe enough for all ages and abilities.

Below are the guidelines that Portland is proposing to become official policy for their neighborhood greenways:

This guidance is based in part on research documented in Low-Stress Bicycling and Network Connectivity (PDF 2.4 MB)

Edit: This post was updated on 9/11/2015 to align with current best practices and feedback from the city.